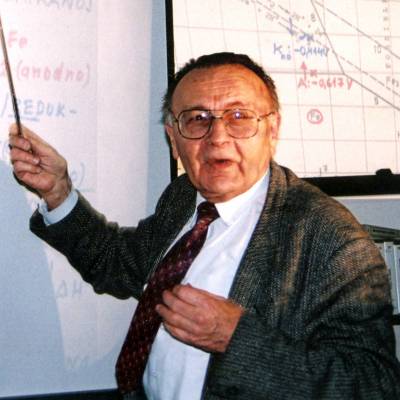 For his exceptional work he received many recognitions, honours and awards

Professor Ivan Esih was born in Zagreb on 28 June 1929. He obtained his PhD in Chemistry from the University of Zagreb in 1970 with a dissertation entitled “Study on Atmospheric Corrosion Mechanisms of Iron and Carbon Steel”. He joined the Technical College at the University of Zagreb in 1961, where he founded the Laboratory of Materials Protection in 1961. From 1967 to 1999 he worked at Faculty of Mechanical Engineering and Naval Architecture.

For his exceptional work he received many recognitions, honours and awards, among them being the Order of Labour with Silver Wreath (1971), the Great FMENA Medal (1976), and the Plaque of the Yugoslav Federation of Engineers and Technicians.

Professor Ivan Esih was an outstanding chemical engineer, researcher, expert and polyglot, and his knowledge and experience were a valuable source for the engineering community in Croatia and abroad. In his teaching, scientific and professional work and his engagement in general, he distinguished himself by perseverance and integrity, an extremely fair and kind relationship to students, collaborators and co-workers, for whom he always had time. Professor Ivan Esih was a great man, our guide and mentor.